"Oh No!" is an event that always occurs when you are about to fail a level. However, there will be a particular reaction that Tiffi (Reality) or Odus (Dreamworld) will make when the player needs only a few of something left if he/she runs out of moves. If the quit button is pressed, this message is replaced by "You pressed the quit button!". For example, if you cleared 9/10 jelly, either Tiffi or Odus will react with "Oh No! You only need 1 more jelly". Take another instance that you are in an ingredient drop level. When you have brought down 2 ingredients out of 3 ingredients, the message says, "You only need 1 more ingredient". It is not yet specific for timed levels, but the message candy order levels is generally having the same reaction with different words.

This reaction is shown when you are about to fail the level, unless you choose to play on. No special offer is given, nor there is an opportunity for an instant win upon having this message. It is considered as the most unfavourable situation when playing a level.

This reaction is triggered when the amount remaining is less than 10% of the requirement, for example, 60 blue candies remaining in level 666. If the amount remaining is three, two, or one, this reaction is triggered regardless of the requirement. As a result, some levels will always result in an "Oh No!" in any failure save quitting. An example is a level which requires objectives in low numbers, such as requiring only one ingredient, or only collecting one combo.

Although "Oh No!" is not explicitly referenced on HTML5, the failure screen will instead display "you only need [a few] more [objectives]." This has the same effect as the Flash version, which shows the "Oh No!" reaction.

An "Oh No!" reaction from Dexter occurs when you are about to fail a level when Space Race is in effect. If you collected one or more of the required candy in your attempt, Dexter says, "If you give up, you'll lose the candy you collected on this level." This "Oh No!" message overrides Tiffi's "Oh No!" message and takes place regardless of the progress made towards the objective before failing.

Only a few failure screens guarantee a failure without any consolation or an option to continue the level. Notice there is no "Oh No" at all. These may only occur if you still have no moves even after your first shuffle, or if you have destroyed the magic mixer when it is still required to be on board. Instead, they simply say:

The reaction that Tiffi makes when the player only needs two more ingredients in ingredient drop levels.

A bomb explodes when the jelly is all cleared. (No longer in effect)

A glitch happened in level 172 when you cleared the jelly but did not reach enough points. 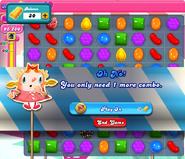 The reaction that Tiffi makes when the player only needs one more combination in candy order levels. (old description)

The reaction that Tiffi makes when the player only needs one more order in candy order levels. (new description) 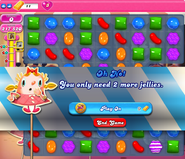 The reaction that Tiffi makes when the player has two jellies left.

The reaction that Odus makes when the player only needs two more ingredients in ingredient drop levels. 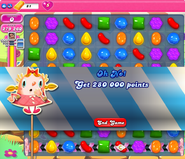 The player has cleared all the jellies but scored insufficient points. 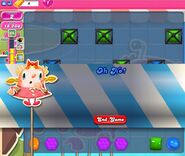 The reaction, when the player collected all orders in level 129 (or 192) and he/she has no possible switches.

Odus fell down
Add a photo to this gallery

One of the most earliest versions of "Oh No!"

Keep trying! Also notice it is the old Oh No on HTML5.

"Oh No!" on HTML5. The player only needs to clear one more jelly.

A regular failure on HTML5. A considerable amount of jelly have been left uncleared.

How it looks on HTML5.

A shuffle is done but there is no switches after. (With candy bombs before the Candy Keep update)

A candy bomb is about to explode.

The level completed "Oh No!" Glitch is performed.

"Oh No!" for clearing the magic mixer without collecting all orders that are only created from them.

"Oh No" on the new HTML5 interface.
Add a photo to this gallery
Retrieved from "https://candycrush.fandom.com/wiki/%22Oh_No!%22?oldid=1516139"
Community content is available under CC-BY-SA unless otherwise noted.