A sweet peek was an event featured only on mobile devices during the release of Bubblegum Bazaar. It simply allowed players to play level 2000 once they passed level 10. 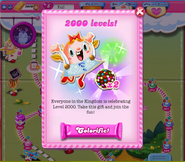 Event notification
Add a photo to this gallery
Retrieved from "https://candycrush.fandom.com/wiki/A_sweet_peek?oldid=1523153"
Community content is available under CC-BY-SA unless otherwise noted.