Allen is a character in Candy Crush Saga. He is an alien that is encountered in the 8th episode, Salty Canyon. Before introducing level 96, his spaceship has crashed. Afterwards, following the completion of level 110, the spaceship is repaired by Tiffi and he gets back in it and flies back home.

He went back to space with his repaired spaceship in the 8th Dreamworld episode, Nerdy Nebula, the Dreamworld version of Salty Canyon.

He appears again in the 15th episode, Sweet Surprise among with other characters.

He also appears in the 58th episode, Gummy Galaxy. Before introducing level 846, his spaceship crashed again. After completing level 860, Tiffi brings a remote control, and another alien, possibly his girlfriend, named Ellen, shows up in another spaceship. She beams him into her spaceship, and they ride off together.

He appears in the 95th episode, Peppermint Party to celebrate New Year's Eve!

In the 104th episode, Biscuit Bay, his spaceship crashed for the third time.

In the 126th episode, Licorice Luna, he feels sad because he thinks the Licorice Luna is too dark and boring. Tiffi helps him by painting rainbows with her rainbow brush.

In the 177th episode, Crunchy Comet, he and Tiffi land a spaceship on a giant comet filled with donuts.

In the 183rd episode, Popcorn Planet, Tiffi uses dryer to blow popcorn from his body.

In the 223rd episode, Marzipan Maze, his spaceship crashed for the fourth time.

Salty Canyon (after story on mobile)

Popcorn Planet
Add a photo to this gallery

Character on map (after episode, Licorice Luna)
Add a photo to this gallery 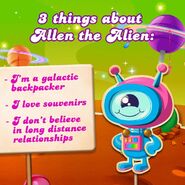 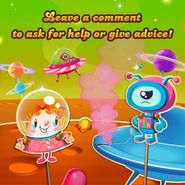 Leave a comment here to ask for help or give advice! 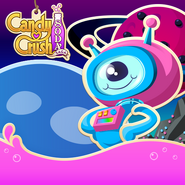 Add a photo to this gallery
Retrieved from "https://candycrush.fandom.com/wiki/Allen?oldid=1615643"
Community content is available under CC-BY-SA unless otherwise noted.