Apple Abode is the 437th episode in Candy Crush Saga and the second episode of World 88 (HTML5). This episode was released on 26 February 2020. The champion title for this episode is Cheeky Chopper.

Tiffi watches Caterpillar soar in the air with the propeller. 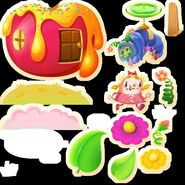