Apple Alley is the 290th episode in Candy Crush Saga and the fifth and final episode of World 58 (HTML5). This episode was released on 23 January 2019. The champion title for this episode is Honey Harvester.

Tiffi finds the apple house from Caramel Clearing and gathers honey from it to give to the Bear. 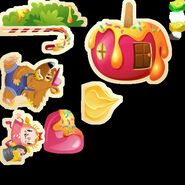