Bakers Bluff is the 258th episode in Candy Crush Saga and the third episode of World 52 (HTML5). This episode was released on 26 September 2018. The champion title for this episode is Bun Baron.

Tiffi and Pete push a cart of cinnamon swirls up a hill. 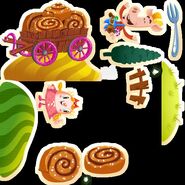