Banana Bliss was the 43rd episode in Dreamworld and the first episode of World 8 of Dreamworld. This episode was released on 8 April 2015. It was the Dreamworld equivalent to the Reality episode Taffy Tropics.

Tiffi, wearing a turban, plays her flute on the snake, which rises her. She then makes a gesture with her hand, and bananas begin to pile up under Monkey. 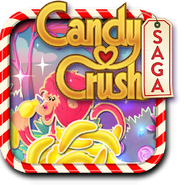 Retrieved from "https://candycrush.fandom.com/wiki/Banana_Bliss?oldid=1619447"
Community content is available under CC-BY-SA unless otherwise noted.