Banana Buffet is the 196th episode of Candy Crush Saga and the first episode of World Forty (HTML5). This episode was released on 22 November 2017. The champion title for this episode is Dessert Deserter.

Mr. Yeti needs help! Harvest is here, and the bananas are everywhere. Tiffi works swift, and turns it all into a banana split. 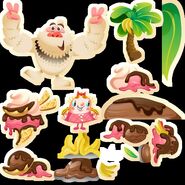 Retrieved from "https://candycrush.fandom.com/wiki/Banana_Buffet?oldid=1247702"
Community content is available under CC-BY-SA unless otherwise noted.