Barry is a minor character in Candy Crush Saga. He is a Sasquatch (also known as "Bigfoot") and encountered in the 61st episode, Crumbly Coast. Before introducing level 891, his hand is stuck into the bottle. After completing level 905, Tiffi brings a tool, and pulls the bottle to free his hand from the bottle. He then begins to eat cookies from the jar.

He reappeared in the 194th episode, Gingerbread Gym, when he wanted to look as cool as his favorite statue of an athlete. He has achieved great results in the gym but something is missing. Tiffi helps by covering him in white glazing and sprinkles to give him the perfect look. 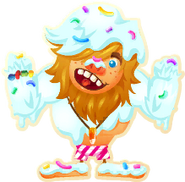