Not to be confused with the Rabbit in the 83rd episode Wonky Wonderland.

Easter Bunny is a character in Candy Crush Saga. He first appears in the 6th episode, Easter Bunny Hills. Before introducing level 66, he appears to be trapped in chocolate. After completing level 80, Tiffi removes the Easter Bunny from the ground with some bubblegum, and his hairs stick up with happiness.

Easter Bunny appears again in the 15th episode, Sweet Surprise, among with other characters.

He also appears in the 56th episode, Candy Calaboose. Before introducing level 816, his plant is withering. After completing level 830, Tiffi uses a candy bomb to blow up the roof of the prison cell, causing the sunlight to enter and revive his plant.

The Easter Bunny also makes a cameo appearance in Twilight Egg, the Dreamworld counterpart of Easter Bunny Hills. There is no story that involves him but he appears in the background, albeit with a dreamy palette-swap. He is also seen wearing a mask, hat, and cape and swinging by a rope. In Charming Carnival, he grabs the carrot that Franky pulls out of his hat. In Twilight Tulips, he pops out from a tulip.

He also introduces the candy order levels on Facebook only from level 126, both Reality and Dreamworld. 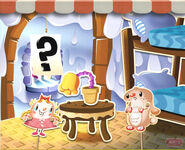 Candy Calaboose after story animation
Add a photo to this gallery 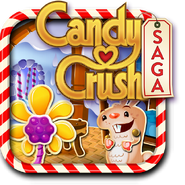 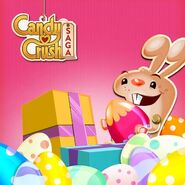 Easter Bunny in a festive image

Easter Bunny with tips for the gold bars

Easter Bunny in the CCS Tv ad
Add a photo to this gallery
Retrieved from "https://candycrush.fandom.com/wiki/Benny?oldid=570880"
Community content is available under CC-BY-SA unless otherwise noted.