Biscuit Bay is the 104th episode in Candy Crush Saga and the fourth episode of World 21 (HTML5). This episode was released on 17 February 2016. The champion title for this episode is Napping Navigator.

Tiffi sails by an island and sees that Allen has crash-landed his spaceship there.

Biscuit Bay is a very hard episode, with a mean of 5. Almost half of the levels in this episode are rated very hard or extremely hard and it is much harder than the previous episode, Candy Canyon. It also features level 1538, which used to be an extremely troublesome level until it was nerfed. 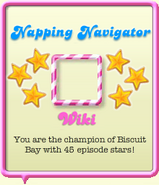 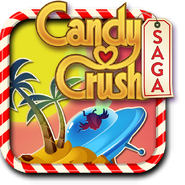