Biscuit Brink is the 331st episode in Candy Crush Saga and the first episode of World 67 (HTML5). This episode was released on 12 June 2019. The champion title for this episode is Biscuit Builder.

Tiffi and Denize reside in the valley where colour bombs grow on trees. 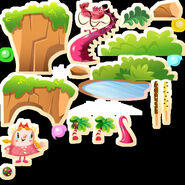