Gator (also known as Mr. Snappy) is a minor character in Candy Crush Saga. He is a crocodile encountered in the 29th episode, Soda Swamp. Before introducing level 411, his swamp has no more fizz and he's very upset, so he asks Tiffi for her help. Tiffi agrees, and after completing level 425, she blows through the straw and brings fizz back into the swamp, much to Gator's delight.

In the 66th episode, Soda Swamp, he is bathing with Unicorn into the swamp filled with soda.

In the 29th Dreamworld episode, Bubbly Bog, he and Tiffi appearing to be jumped for joy as the swamp bubbles.

After Story (animation)
Add a photo to this gallery

Bubbly Bog (animation)
Add a photo to this gallery 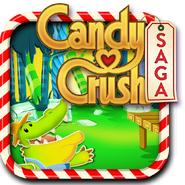 Character seen on Soda Swamp (Episode 29) episode icon
Add a photo to this gallery
Retrieved from "https://candycrush.fandom.com/wiki/Bobby?oldid=570872"
Community content is available under CC-BY-SA unless otherwise noted.