Bounty Bush is the 276th episode in Candy Crush Saga and the first episode of World 56 (HTML5). This episode was released on 5 December 2018. The champion title for this episode is Perky Pirate.

Captain Sweet Tooth's treasure chest has ended up tangled in the treetops. Tiffi and the Captain blow up balloons with their bubblegum to reach it. 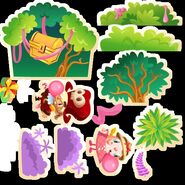