Breezy Beanstalk is the 449th episode in Candy Crush Saga and the fourth episode of World 90 (HTML5). This episode was released on 25 March 2020. The champion title for this episode is Propellor Pilot.

Tiffi and Gerbil use their candy wrappers as propellers to ascend the beanstalk. 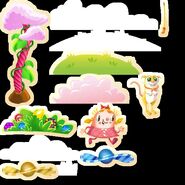