Brulee Bay is the 90th episode in Candy Crush Saga and the fifth and final episode of World 18 (HTML5). This episode was released on 11 November 2015. The champion title for this episode is Tropical Trooper.

Tiffi and the crab are partying on the beach.

Brulee Bay is a somewhat easy episode, with a mean of 3.33, which is anomalous that late into the game. It contains three somewhat hard levels: 1330, 1332 and 1334. At first, this episode had a mean of 5.8, but after several nerfs, it became MUCH easier. Overall, this episode is much easier than the previous episode, Honey Hut. 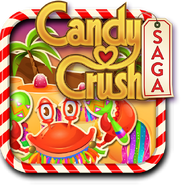