Bubble Bar is the 349th episode in Candy Crush Saga and the fourth episode of World 70 (HTML5). This episode was released on 14 August 2019. The champion title for this episode is Tea Tutor.

Tiffi uses the bubbles to improve the taste of Neko's drink. 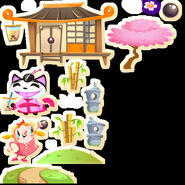