Bubblegum Bridge is the 7th episode in Candy Crush Saga and the second episode of World 2 (HTML5). This episode was released on 23 May 2012. It also introduces one of the main, recurring antagonists of the game: the Bubblegum Troll. The champion title for this episode is Troll Hunter.

Before episode:
Tiffi encounters a pink monster named the Bubblegum Troll that wants candy and as the name suggests, the river is filled with liquid bubblegum.
After episode:
The Bubblegum Troll steals Tiffi's candies, making her cry. In the meantime, an airship labelled "Candy Crush Saga" picks up Tiffi and takes her to the next episode, Salty Canyon.

Bubblegum Bridge is an easy episode, with a mean of 2.6. Though many of the levels are rated easy, levels 85, 87, 88 and 90 are rated medium. Overall, it is of similar difficulty to the previous episode, Easter Bunny Hills.

What is that under the bridge? (before story)

Oh no! There is danger in front of me! (before story)

Bubblegum Troll steals away her candies (after story)

An airship bound for Salty Canyon (after story) 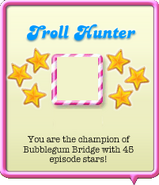 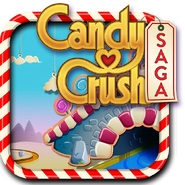 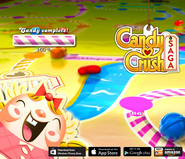 Bubblegum Bridge map appears when the game is loading