This article is about the booster. For the character, see Bubblegum Troll (character).

Bubblegum Troll was a booster in Candy Crush Saga, exclusive to the Flash version, that debuted in level 156. When used, all the chocolate and locked chocolate was blown away, and it covers the chocolate spawners in bubblegum, preventing the chocolate from spawning for 5 moves. This was only usable in levels with chocolate spawners. Its appearance was a bubblegum monster, hence the name. It is also named after the character. 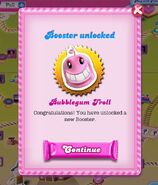 This will appear when first unlocked 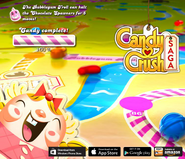 What the bubblegum troll does

Booster on the map

Bubblegum attached to the locked chocolate spawner (5 moves left)
Add a photo to this gallery
Retrieved from "https://candycrush.fandom.com/wiki/Bubblegum_Troll_(booster)?oldid=1663963"
Community content is available under CC-BY-SA unless otherwise noted.