Bubbly Bath is the 210th episode in Candy Crush Saga and the fifth and final episode of World 42 (HTML5). This episode was released on 7 February 2018. The champion title for this episode is Foam Fetcher.

Tiffi uses soap to put on Milly's hair, and the bath tub is so much cleaner. 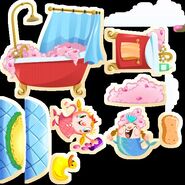