Bubbly Boulevard is the 366th episode of Candy Crush Saga and the first episode of World 74 (HTML5). This episode was released on 18 September 2019. The champion title for this episode is Soda Saviour.

Tiffi sprays soda from the fire hydrant onto the buildings to make a huge soda slide for Hippo to slide down. 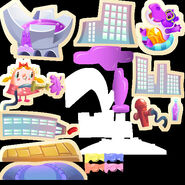 Retrieved from "https://candycrush.fandom.com/wiki/Bubbly_Boulevard?oldid=1597703"
Community content is available under CC-BY-SA unless otherwise noted.