Burger Buffet is the 325th episode in Candy Crush Saga and the fifth and final episode of World 65 (HTML5). This episode was released on 22 May 2019. The champion title for this episode is Patty President.

Tiffi and Mr. Yeti go to the diner and order burgers, fries and cola. 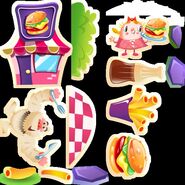