Butterscotch Boulders is the 31st episode in Candy Crush Saga and the first episode of World 7 (HTML5). This episode was released on 8 August 2013. The champion title for this episode is Cherry Sheriff.

Before episode:
Tiffi encounters Casey, a train driver who had an encounter with the Bubblegum Troll, who had blocked the tracks with chocolate.
After episode:
Casey falls asleep; a day later, he wakes up and finds that the sun has melted chocolate.

Butterscotch Boulders is an easy episode, with a mean of 2.33. However, two levels can be a bit tricky: 445 and 450. Nevertheless, it is much easier than the previous episode, Rainbow Runway.

Ha Ha Ha! I blocked the train tracks with chocolate!

Mr train driver, why are you so upset?

The bubblegum troll blocked the train tracks with chocolate!

I know what to do. However, it will take a while.

Little girl, what is your solution?

All the chocolate has melted! Thank you! 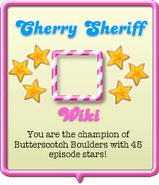 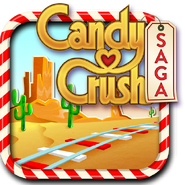 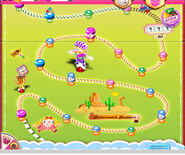