Butterscotch Boulders is the 363rd episode in Candy Crush Saga and the third episode of World 73 (HTML5). This episode was released on 11 September 2019. The champion title for this episode is Thumb Twiddler.

Tiffi and Casey ride a train through the desert. 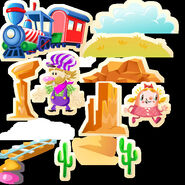 Retrieved from "https://candycrush.fandom.com/wiki/Butterscotch_Boulders_(Episode_363)?oldid=1718357"
Community content is available under CC-BY-SA unless otherwise noted.