Buttery Bistro is the 405th episode in Candy Crush Saga and the fifth and final episode of World 81 (HTML5). This episode was released on 18 December 2019. The champion title for this episode is Spaghetti Slurper.

Tiffi serves Mr. Yeti a plate of spaghetti and meatballs, with the meatballs designed to look like colour bombs. 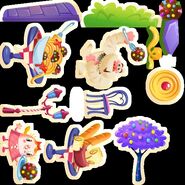