Cacao Cliff is the 249th episode in Candy Crush Saga and the fourth episode of World 50 (HTML5). This episode was released on 15 August 2018. The champion title for this episode is Fancy Flier.

Tiffi and Allen arrive at the chocolatey cliffs via a spaceship that resembles a blue candy. 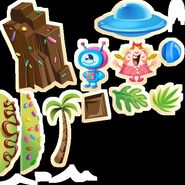