Cake bombs can be destroyed either by making simple matches along the edges of the cake (unless being protected by Candy Cane Fence or Candy Cane Curls), or by using special candies and their combinations. This is detailed in the next section.

When all eight slices of cake are removed, a pink party popper will appear on the bottom right hand side of the screen after all cascades have been completed in the move that the cake was destroyed, and sends an explosion through the entire board, removing candies (include standard special candies) and blockers, and shatter the frame of the cake bomb. In the case of elements with several layers such as icing or jelly, a single layer will be removed. If two or more cake bombs are cleared in one move, they will activate one at a time in the same order of being cleared. The party popper appears for the first cake, and the board is cleared. When the board has settled, the next cake bomb will activate, etc. 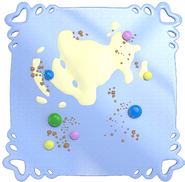 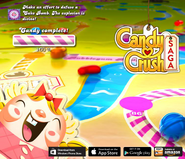 Cake bomb in the CCS television ad
Add a photo to this gallery
Retrieved from "https://candycrush.fandom.com/wiki/Cake_Bomb?oldid=1477289"
Community content is available under CC-BY-SA unless otherwise noted.