Cake Climb is a type of event featured on HTML5. In these events, you must win a predetermined sequence of levels consecutively and in order without failing. If you fail a level and met the level failure message, you must start over from the first level in the sequence.

The wonderful Berry Baker has spent all day and all night baking the most delicious cake the world has ever seen, smelt, tasted or Instagramed. But in her rush to create cake perfection, she forgot to light the candles! Now the frosting is so slippery she can’t get to the top, that is where you come in! Berry Baker needs your help! You have 48hrs (from 22:00 GMT on 25/09/15) to light the candles at the top of the cake and if you succeed, the very merry Berry will reward you in the form of boosters and other goodies.

Lighting the candles is simple but it’s definitely not easy; there are three levels to complete and each time you complete a level you light a candle. If you complete three levels in a row Berry Baker will shower you with epic gifts! If you fail a level, you’ll slip off the cake and will have to start right at the beginning, you will also lose a life!

Numerous variations of Cake Climb appear throughout the game. They may not have the title "Cake Climb" but they have the same mechanics. See here.

Prompt when you give up

And the rewards are respawning!

Info "Can you do it?" (With alternate description) 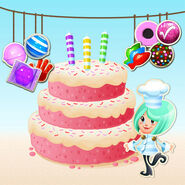 Event Notification (Alternate)
Add a photo to this gallery

Level 3 - Unique to Cake Climb, Ingredients, 40 moves
Add a photo to this gallery

Level 2 - 230 (Before ingredients are dispensed)

Level 2 - 230 (After ingredients are dispensed)

Error Message for Level 3
Add a photo to this gallery

January 23, 2016 - (variation for Up for a challenge in some devices)
This event was glitched.

February 20, 2016
All of these levels have appeared in previous Cake Climb type events.

March 14, 2016
The third level may be glitched where the given striped candy cannot remove icings.

Retrieved from "https://candycrush.fandom.com/wiki/Cake_Climb?oldid=1528339"
Community content is available under CC-BY-SA unless otherwise noted.