Candied Conservatory is the 422nd episode in Candy Crush Saga and the second episode of World 85 (HTML5). This episode was released on 22 January 2020. The champion title for this episode is Floral Floater.

Tiffi watches Mr. Snail float over the greenhouse with his balloons. 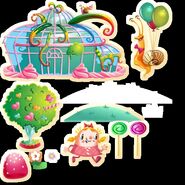