Not to be confused with Colour Bomb or Cake Bomb.

The candy bomb (also known as time bomb or simply bomb) is an element in Candy Crush Saga. It is one of the most difficult obstacles in the game. It appears as a coloured bomb with a number inside it. The number varies depending on the level and can be as high as 99 or as low as one. For every move used, the number on the bomb will be decreased by one, as long as the bomb is not gotten rid of until it reaches zero. When a candy bomb’s timer reaches zero, it will explode the whole board and the player will fail the level.

The candy bomb is first introduced for the 8th episode, Salty Canyon. It first appears in level 96. Like liquorice swirls, they can be created out of dispensers; this happens starting from the 9th episode, Peppermint Palace (level 111). They can be dispensed from the same dispensers as other elements in later episodes.

Candy bombs can be destroyed by a normal candy match, or through any special candy's effects reaching the candy bomb. Each bomb is worth 3,000 (Flash) / 500 (HTML5) points when destroyed. Candies will take the place of the square once the candy bomb is destroyed.

Bombs can be combined with other blockers to form particularly deadly combinations. Bombs under liquorice locks, in marmalade, or inside sugar chests will explode while still trapped in their confining blocker if they are not freed and destroyed before the counter reaches zero.

The candy bomb's timer can be increased by 5 with the help of a booster, called the Bomb Cooler, which adds 5 to every bombs' timer on the board. It is unlocked when the player reaches level 97.

As of the Candy Keep update, bombs will be shuffled when the board shuffles due to lacking possible moves. Before the update, level 370 was problematic if there are no more possible switches.

The first poll is about how difficult clearing candy bombs is to you. Please take some time to answer it.

It is vital to remove the bombs before their timers reach

or else the bombs will explode and cause the failure of a level.

However, removing candy bombs can be fairly difficult at times and can impact the difficulty of a level directly. Sometimes they can be isolated from the main part of the board, forcing the player to remove them using special candies. Depending on the bombs' position, it may be necessary to plan a few steps forward to successfully remove them. On an open board, making matches in the middle of the board can decrease the chances of bombs spawning on the edges. Sometimes, bombs can be easy to remove also.

While candy bombs are threatening, it is also important to note that bombs provide benefits of boosting the score (3,000 points awarded for every bomb removed). Using a colour bomb on a candy bomb provides massive points, sometimes up to hundreds of thousands of points. This holds for moves, timed levels and even jelly, ingredient and candy order levels, where getting enough points is the key to passing the level.

Take note that when it comes to focusing on getting points, using a lollipop hammer to remove it on certain versions is not recommended, as it will give you 0 points. Only use it if the timer is 1 and you can't remove it.

On timed levels, you can still lose after reaching the target score if a bomb explodes. Once the target score has been reached, you can stop and let the time run out if you have no possible moves to remove a bomb and making a move would set off a bomb.

On HTML5, you can still win if you have a bomb at 0 and the number of moves (or time) at 0 unless you did not score enough points on that level.

This setup is seen sometimes in levels, starting unofficially from level 98 and officially at level 107. When it does make an appearance, it is very deadly. It is one of the most notorious setups in the game. For example, the old version of 440 used to be a very difficult level due to the heavy use of this setup.

The reason this is so deadly is that a liquorice lock can be tricky to remove, but when there is a bomb behind it, it becomes even harder, as no matter how you destroy the locked candy - using a colour bomb to destroy the colour of the candy bomb behind it, striped candies, or a simple match, only the liquorice lock will be destroyed, and the bomb will stay. The setup takes two hits to clear, which can mean that the bomb is not destroyed in time. Exceptions to the use of the colour bomb + striped candy combination of the same colour as the bomb, or the detonation of a wrapped candy nearby so that both explosions affect the locked bomb.

Some levels only have one use of this setup, and some feature it very heavily, but any level with this setup will likely bring an early end to an attempt or two at least if not removed.

The best strategy to remove it is to activate a wrapped candy around it to remove the lock and the bomb. Or match the colour bomb with a striped candy, but, this is very hard.

A red candy bomb without timer

An orange candy bomb without timer

A yellow candy bomb without timer

A green candy bomb without timer

A blue candy bomb without timer

A purple candy bomb without timer 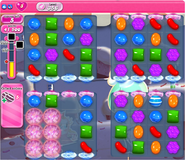 What happens when a Candy Bomb explodes when you finished your requirement in the recent past. (Level 275)

So Many Candy Bombs! 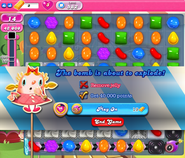 The bomb is about to explode! (Mobile)

A level featuring the new texture of candy bombs. 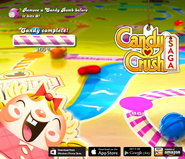 Tip on how to beat a level with candy bombs