Candy Circus is the 251st episode in Candy Crush Saga and the first episode of World 51 (HTML5). This episode was released on 29 August 2018. The champion title for this episode is Magic Master.

Magic Mort performs at the circus, along with Tiffi, who is holding two lollies. 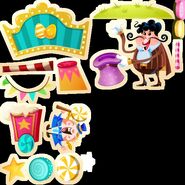