For the 67th episode in Reality, see Candy Clouds (Episode 67).

Candy Clouds is the 20th episode in Candy Crush Saga and the fifth and final episode of World 4 (HTML5). This episode was released on 20 December 2012. The champion title for this episode is Sky Lord.

Before episode:
This episode's plot is reminiscent to the British fairy tale, Jack and the Beanstalk, because of Tiffi's encounter with a Giant, the making of a beanstalk, and a castle on clouds. The giant (only feet seen) has fallen from his castle.
After episode:
Tiffi plants a magic bean in the ground, causing an colossal beanstalk to form, leading directly to the castle. The giant finds this very convenient.

Candy Clouds is a very easy - easy episode, with a mean of 1.93. Only levels 279 and 290 can be tricky and they are the only levels in the episode to be rated medium. Overall, this episode is easier than the previous episode, Holiday Hut.

I fell from my castle and cannot get back.

I can help you get back home! 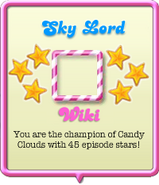 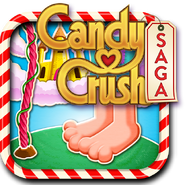