Candy Coast is the 296th episode in Candy Crush Saga and the first episode of World 60 (HTML5). This episode was released on 13 February 2019. The champion title for this episode is Warf Watcher.

Tiffi and Olivia find giant cereal hoops to use as emergency flotation devices on their boats. 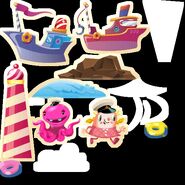