Candy Column is a Christmas edition of Cake Climb. If you meet the level failure message, you will slide down to the first level. Exiting the level before making the first move however will not cause you to slide down (unless it is a time level). 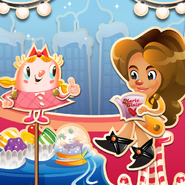 Claiming rewards
Add a photo to this gallery

Wrong info for third level
Add a photo to this gallery
Retrieved from "https://candycrush.fandom.com/wiki/Candy_Column?oldid=970762"
Community content is available under CC-BY-SA unless otherwise noted.