Candy Crossing is the 447th episode in Candy Crush Saga and the second episode of World 90 (HTML5). This episode was released on 20 March 2020. The champion title for this episode is Inquisitive Investigator.

Tiffi and Bubblegum investigate the trail in the forest. 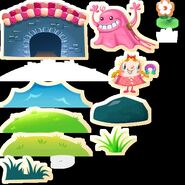