Candy Crush Saga, often referred to as Candy Crush (not to be confused with Candy Crush game) is a video game for Facebook which was released on 12 April 2012 and for smartphones which was released on 14 November 2012.[1] It is the spin-off to the original game Candy Crush and was developed by King (also known as King.com). In March 2013, Candy Crush Saga surpassed FarmVille 2 as the most popular game on Facebook, with 405.6 million average monthly users.[2][3] The game is available on both iPhone and Android. The game has 3 spinoffs, Candy Crush Soda Saga, Candy Crush Jelly Saga, and Candy Crush Friends Saga. In an article posted on King Care on 3 March 2017, the developers stated that they are planning to convert Flash into HTML5 to make access faster and serve better.[4] On 28 June 2017, the HTML5 version of this game initially rolled out for all Facebook users.[5] Few days later, some Facebook users reverted back to Flash, most likely due to mostly negative responses. In an article posted on King Care on 3 October 2017, it stated that there would be no more levels after episode 189 for King.com users.[6]

In a blog posted on King Care on 2 February 2018, it stated that the devices with older software versions than iOS 8 and Android 4.1 won't expect any more updates after version 1.117. Hence, the requirements must be fulfilled to receive updates past 1.117.[7]

The game is a variation of "match 3" games such as Bejeweled. Each level has a different shaped grid filled with candies of two to six different colours (Yellow, Red, Purple, Blue, Orange, and Green) and sometimes obstacles (more known as blockers). The basic move of the game consists of swapping two candies positions to align sets of three of the same colour, whereupon they disappear, causing candies above them to collapse into the space left behind, often resulting in chain reactions. Moves and alignments must be horizontal/vertical. The level's objectives must be met before the player runs out of moves (or time on timed levels); in each case, the player must earn enough points to get the first star (out of 3) in the scoring system.

Play Candy Crush Saga and switch and match your way through hundreds of levels in this divine puzzle adventure. Join Tiffi and Mr. Toffee on their epic journey in an online game full of delicious treats! Ain't it the sweetest game ever?

Join Mr. Toffee and Tiffi on an exciting journey through the sweet and colorful world of Candy Crush in this fun candy switcher!

Web description (how to play)Edit

Mix and match sweets in a combination of three or more to gain points and other bonuses as you progress! When three or more candies of the same color are switched next to each other they will burst and you will win points. The aim is to gain as many points as possible to achieve 1, 2 or 3 stars!

Candy Crush Saga is set in the magically tasty world of the Candy Kingdom. It is here we meet our quirky yet extremely knowledgeable guide Mr. Toffee who runs the Candy Store in Candy Town.

One magical day in Candy Town, Mr. Toffee opened his delicious store to find a little candy bag had been left on his doorstep. To his delight, inside the bag he found a little bundle of sweetness called Tiffi, so he took her in and brought her up as his daughter.
Tiffi is a humble girl and has lots of friends in Candy Town but is eager to explore more of the mesmerizing kingdom. Under the watchful gaze of Mr. Toffee and alongside her great friend Yeti, she sets out to explore the Candy Kingdom.

Her magical adventures take her to all sorts of wondrous places; the pretty Peppermint Palace, the lickable Lemonade Lake and the gorgeous Gingerbread to name just a few.
Along the way she stops to help some quirky characters and meets some even kookier animals, not to mention the mischievous Bubble-Gum Troll, who is intent on causing havoc in the Candy Kingdom!

Follow Tiffi and her friends through delicious lands in your very own Candy Crush Saga.

There are currently seven different types of levels:

If the player succeeds in reaching the goal in the Jelly, Ingredients, or Candy Order levels, the game does a "Sugar Crush", starting an automatic bonus round where the player's remaining moves are used to increase the score through creating various special candies on the board. If the player does not gain 1 star from his or her score, a life is deducted. The player is given a default number of five lives, with each life restored after a half hour. The player has the option of asking friends for more lives, buying a life restoring item, or buying a special item that expands the number of lives the player has by default.

Levels are organised into "Episodes" of 15 levels each, except for the first two episodes, Candy Town and Candy Factory, which have 10 each, with the background themed to a certain setting. Also, the episodes are organised into "Worlds" of 6 episodes each, except for World Eleven and further worlds in Reality and World Eight in Dreamworld of 3 episodes each. In episodes after Candy Factory (or in the case of iOS, Lemonade Lake), a ticket is needed to unlock the next episode. Similar to getting more lives, the player has the option of asking friends for tickets, buying tickets using gold bars or money, or completing Mystery Quests.

The special candies are created when combinations of four or more candies of the same colour are matched together.

Other various "boosters" can be purchased, such as the lollipop hammer, which can clear one candy from the board, or the increased time or moves boosters.

Obstacles, or blockers also appear in levels. These include the unmatchable and resistant-to-special candies liquorice swirls, the expanding chocolate, the candy bombs that end the game if they are not cleared before their move count runs out, and the icing that require multiple matches to eliminate. The board will also contain liquorice locks, which are candies in liquorice "cages" that cannot be moved until they are matched, and marmalade, which holds a special candy.

"With over 1 trillion levels played, Candy Crush is one of the most popular mobile games in the world. Now it's the largest television experience ever! Where teams will climb, swing and match candies as fast as they can, swiping away the competition! Throughout the night, teams will compete in qualifying rounds, the winner of each round will have the advantage of choosing which of the four king sized challenges they'd like to play! And in the end, the 2 teams with the most matches will face off for a chance to win $100,000! Hold on for the ride of your life!" ANNOUNCER: "Now here's your host, Mario Lopez!" DEEP MALE VOICE: "Sweet!"

CBS produces a live-action Candy Crush game show in partnership with King that premiered on July 9, 2017.[15] It is an hour-long competition among several two-person teams using interactive games that are based on Candy Crush. The show is produced by Lionsgate with executive producer Matt Kunitz, and with collaboration by Sebastian Knutsson, the creative developer of the first Candy Crush game.[16] Mario Lopez hosts the show.[17]

Four teams play in each episode doing various challenges based on the Candy Crush game, with the winning team earning a guaranteed $100,000.

Error
Add a photo to this gallery

The Logo, on a string

CCS logo in candycrushsaga.com
Add a photo to this gallery

Trailer background
Add a photo to this gallery 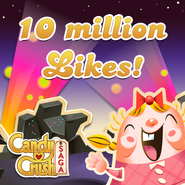 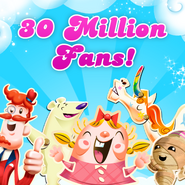 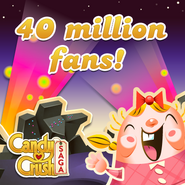 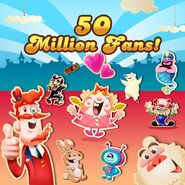 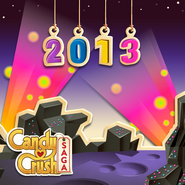 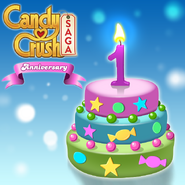 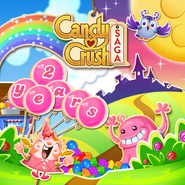 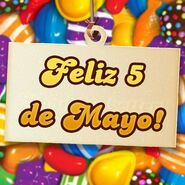 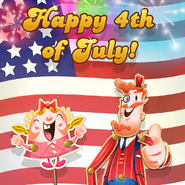 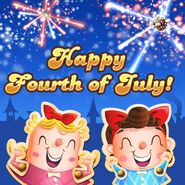 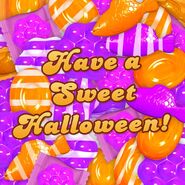 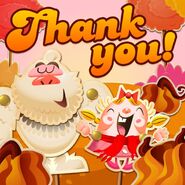 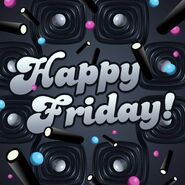 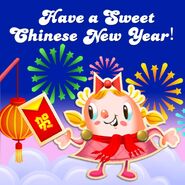 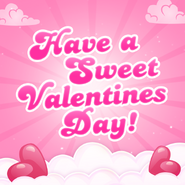 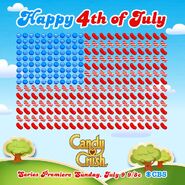 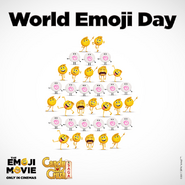 It's World Emoji Day! Celebrate with Gene and Fish Cake by telling us that feeling when you pass a tricky level, only in emojis! 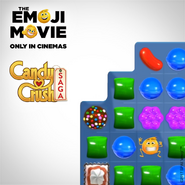 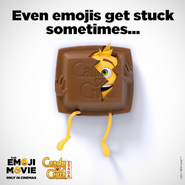 It's happened to the best of us, including Gene from The EMOJI MOVIE.
Add a photo to this gallery 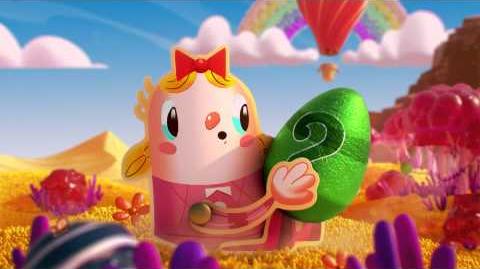 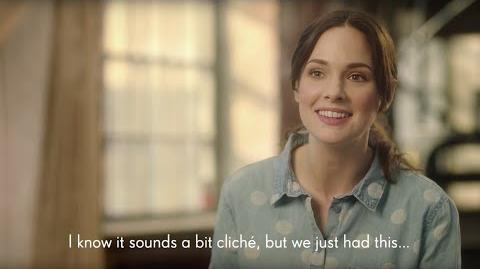 Love on all levels - Relationship Goals 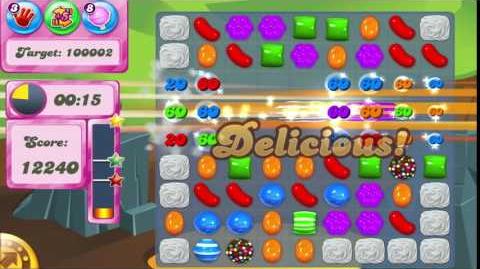 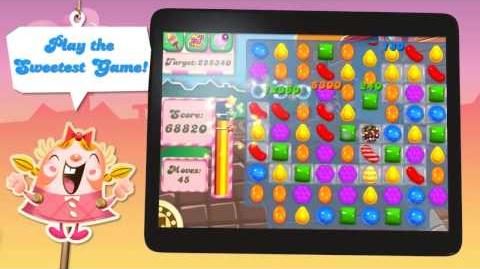 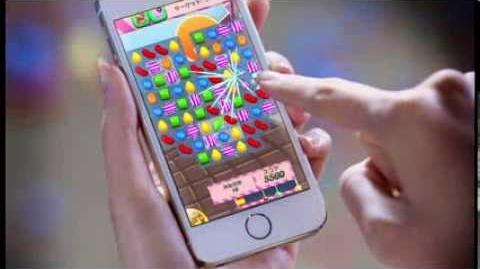 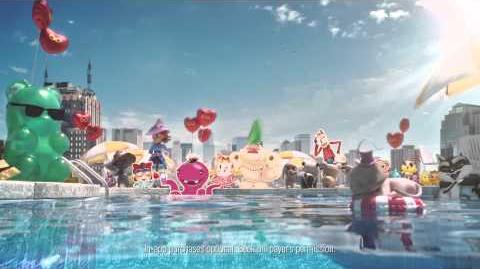 Weekend Sale - Dive in and join the party! 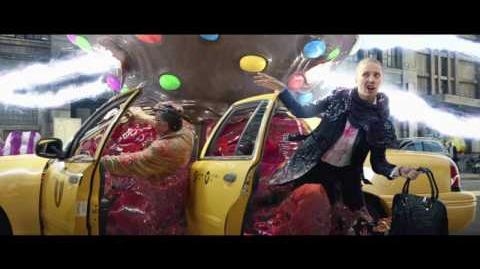 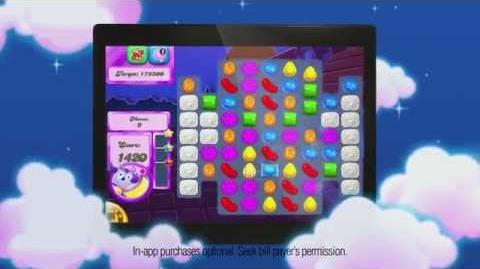 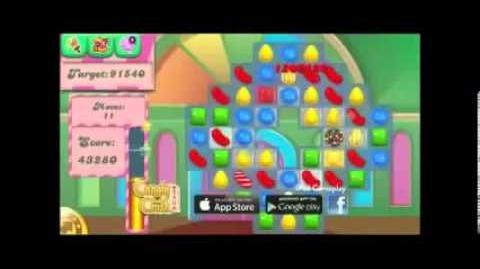 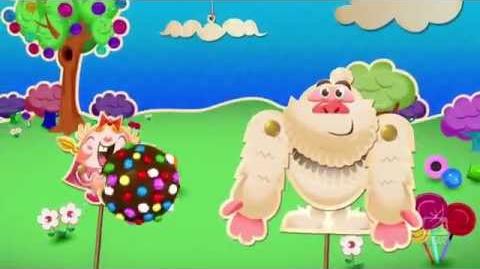 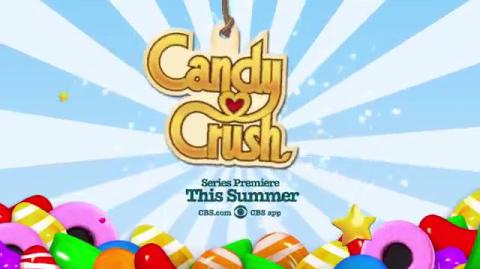