One of the unique things about the candy frog is that it does not disappear when matched, nor is it affected by gravity (i.e. if a space below it is empty, it will remain in place and candies from either side will drop into the gap. Candies above the candy frog will rest above it unless they fall into gaps on either side). The candy frog is movable, however, and can be moved to make normal matches with other candies of its own colour, or to combine with other special candies as noted below. If it is placed on a conveyor belt, it will also be moved along the direction at the end of a move (787, 1295 and 1750 are examples).

The candy frog consumes any candies it is matched with, destroyed via its special candy powers as noted below, or all candies destroyed by another special candy or combination when the frog is caught in the blast radius. When the candy frog consumes 6 candies , it will reach a state where a "Frogtastic!" voice is heard; that state is created when the frog is totally stuffed, making a belch, and rings are surrounding it. Then if you click it and select a part of the board, it will jump off the board and land directly on the part you selected, making an explosion and taking the surrounding 9 candies (3*3 area) on the place he lands (similar to a wrapped candy); after that it changes colo(u)r.

It is also possible to swap a normal frog with a special candy. In most cases, the special candy will be activated and the frog will copy the special effect (including the direction of stripes, in case of a striped candy). Jelly fish is an exception, however.

It can also appear in sugar chests, starting from 1017. It is not possible to feed a frog encased in a chest.

Candy frogs and magic mixers appear in the same level for the first time in 2204. The former is unaffected by blockers spawned by the magic mixer, much like ingredients.

Candy frog is required as part of the order (first seen in 1055). To collect one of its orders, you need to feed the frog to frogtastic phase, then activate it.

Before the removal of timed levels, their first appearance in one was in level 1004. The time was not affected, even if it was being activated. Hence, a few seconds could be wasted in this process. 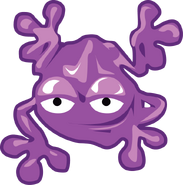