Candy Town is the 1st episode in Candy Crush Saga and the first episode of World 1 (HTML5). This episode was released on 23 March 2012. The champion title for this episode is Mayor of Candy Town.

Before episode:
Tiffi meets Mr. Toffee who directs her to the first level and through the tutorials.
After episode:
Tiffi decides to explore the world (or in this case, episodes) only to be held up by Mr. Toffee to be told that she is going the wrong way. As the game progresses, she helps solve the problems in each episode.

Specifically designed for newcomers, Candy Town is an extremely easy episode, as all the levels in this episode are very easy. Being the first episode, no levels pose a problem.

Well, it's about time to go out and explore the world!

Psst, it's that way!

I will show you the way.

Well, it's about time to go out and explore the world!

Psst, it's that way! 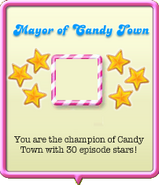 Candy Town in Google Play Store. Notice that it is the old version 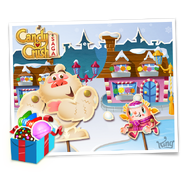 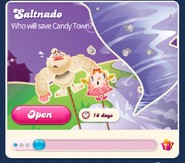 Candy Town buried in salt in the wake of a tornado 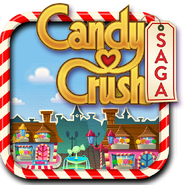 Names in other languages[]