Captain Sweet Tooth is a minor character in Candy Crush Saga. He is a pirate encountered in the 87th episode, Butter Rum Reef. Before introducing level 1281, he is altogether with Tiffi who is smiling. He first appears in Pirate Weekend, one of the events on mobile version.

In the 220th episode, Tasty Tropics, his ship sunk and he's now stranded on a island. Tiffi builds him a ship using the marshmallows from the island.

In the 232nd episode, Booty Bay, he needs to get to his ship, but there are sharks swimming in the waters. Tiffi uses a big lollipop to lure away all the sharks.

In the 250th episode, Pudding Patch, Tiffi finds a key to unlock the treasure that he found on the island with the silver jelly.

In the 276th episode, Bounty Bush, his treasure chest has ended up tangled in the treetops. Tiffi and the Captain blow up balloons with their bubblegum to reach it.

In the 304th episode, Treasure Tropics, he and Tiffi have a party to celebrate them finding the treasure chest. 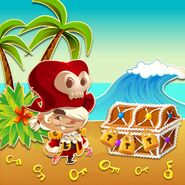