Caramel Cliffs is the 347th episode in Candy Crush Saga and the second episode of World 70 (HTML5). This episode was released on 7 August 2019. The champion title for this episode is Bounty Boss.

Tiffi dives for treasure beneath the cliffs while Captain Sweet Tooth mans the boat. 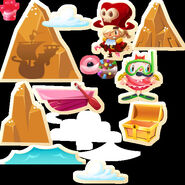