Caramel Cove is the 14th episode in Candy Crush Saga and the fourth episode of World 3 (HTML5). This episode was released on 17 September 2012. The champion title for this episode is Caramel Chieftain.

Before episode:
Tiffi arrives at Caramel Cove seeing that the tiki mascot is afraid that the volcano will explode and destroy the cove.
After episode:
Tiffi puts a massive colour bomb in the volcano so it will not erupt. The tiki replies, "Mahalo little girl!".

Caramel Cove is a somewhat easy - medium episode, with a mean of 3.47. It has two somewhat hard levels: 191 and 199, and the first very hard level in the entire game: 197. Overall, this episode is much harder than the previous episode, Cupcake Circus.

Help! The volcano has gone berserk! 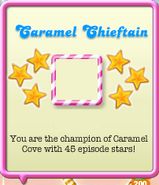 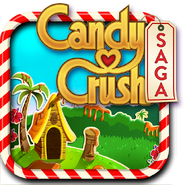