Celestial Cinema is the 335th episode in Candy Crush Saga and the fifth and final episode of World 67 (HTML5). This episode was released on 26 June 2019. The champion title for this episode is Cosmic Critic.

While in space, Tiffi and Ellen watch the events that are happening back on Earth with Ellen's satellite television. 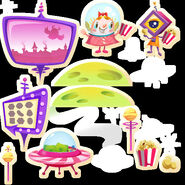