Chameleon Candy (also known as Alternating Candy or Rainbow Candy) is a secondary special candy, first introduced in level 306 on the 22nd episode, Savory Shores. These candies change their colour after each move that is made, and alternate between two colours.

They are easy to tell apart from normal candies as they have a small pink aura around them and a rainbow sweeps across them every few seconds.

Many players consider rainbow candies annoying as they can take away a possible match therefore having to make a match elsewhere to get the candies to change back. Other users have complained that the flashing candies cause dizziness and headaches.

Sometimes, chameleon candies are found behind marmalade, liquorice locks or sugar chests. They will still change colour every move even when behind any of these blockers.

Chameleon candy first appears in level 306 and in almost every level in Savory Shores.

After that, however, they are a rare sight, only appearing very rarely. Many episodes don't have any levels with rainbow candies at all. There can be tens of levels without rainbow candies, and every now and again they make a one-off appearance. There are no rainbow candies between level 472 and level 512, and thereafter none until level 527.

It can also come out of a mystery candy, but such an outcome is considerably uncommon (rare if it's before level 306).

Chameleon candies can be dispensed from candy cannons, starting from level 2198.

Chameleon Candies (Purple)
Add a photo to this gallery 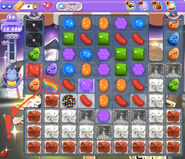 Chameleon Candy in Dreamworld 241, way before its official appearance. This happened a result of destroying a mystery candy
Add a photo to this gallery 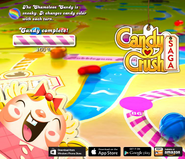 Property of chameleon candies
Add a photo to this gallery

Chameleon candy cannon (old)
Add a photo to this gallery
Retrieved from "https://candycrush.fandom.com/wiki/Chameleon_Candy?oldid=1476394"
Community content is available under CC-BY-SA unless otherwise noted.