The champion title (also known as master title, master trophy, winning trophy, winning cup or simply trophy) is a special kind of feature that is available on Candy Crush Saga.

It was introduced since August 13, 2013, for Flash, which was later discontinued. Circa 2019, they are introduced as master titles for HTML5.

Hovering over a trophy on the map will display the champion title, your profile picture with 3 stars to either side of it, a brief description of the title and how many stars you have in that episode. If a friend holds a champion title, hovering over it will tell you how many more stars he/she has than you (there is a glitch which tells that you need 0 more stars). 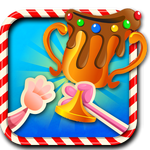 Instead of earning the most number of stars, your goal is to obtain a diamond trophy, by fulfilling either, or both, of the two conditions: obtaining a gold crown, or earning sugar stars.

Benefits are earned every time you have a crown. They are applied in the next episode (i.e. if you obtained a trophy in episode 96, benefits will apply in episode 97). 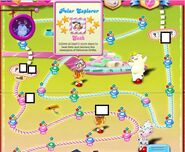 You are the Champion!
Add a photo to this gallery

Benefits of earning a Master Trophy.

Application of the benefits in the next episode.

Mystery in the making! This time, with a silver trophy.

Once you finish the episode, the trophy's benefits are activated for the next one. 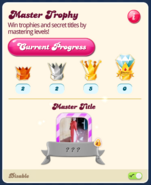 Info (HTML5)
Add a photo to this gallery
Retrieved from "https://candycrush.fandom.com/wiki/Champion_Title?oldid=1616144"
Community content is available under CC-BY-SA unless otherwise noted.