View source
watch 03:01
Wiki Targeted (Games)
Do you like this video?
Play Sound

Charming Carnival was the 38th episode in Dreamworld and the second episode of World 7 of Dreamworld. This episode was released on 29 January 2015. It was the Dreamworld equivalent to the Reality episode Jelly Wagon.

Tiffi watches Magic Mort taking out a carrot from behind, and Benny pops out of his hat to grab the carrot.

Charming Carnival is a somewhat hard episode, with a mean of 4.33. It has five somewhat hard-hard levels: 548, 555, 557, 558, and 560 and two very hard levels: 552 and 556. Overall, this episode is slightly easier than the previous episode, Surreal Safari but is harder than its reality counterpoint, Jelly Wagon. 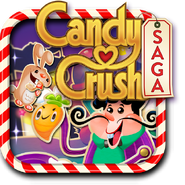 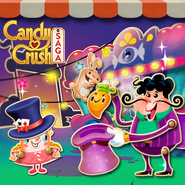