Charming Chateau is the 403rd episode in Candy Crush Saga and the third episode of World 81 (HTML5). This episode was released on 11 December 2019. The champion title for this episode is Grand Guardian. 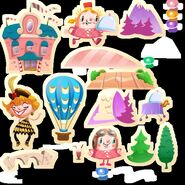