The Cherry Baroness is a character who is first encountered in the 33rd episode, Waffle Workshop. Before introducing level 471, she is stuck on top of a mound of candy, and demands Tiffi, calling her a "peasant", to get her down at once. After completing level 485, the Baroness is seen outraged by Tiffi requesting her to say "please" first. The Baroness gets so angry that she pounds down on all the candy below her, and manages to return to the ground. Tiffi congratulates her on getting down by herself, and the Baroness retorts with, "Whatever!" then walks away.

She also appears in the 59th episode, Truffle Terrace. She plays an antagonising role, similar to the Bubblegum Troll. Before level 861, she steals Tomas' hat.

She appears again in the 62nd episode, Polka Park. Before introducing level 906, her hair is stuck with bubblegum. After completing level 920, Tiffi uses a scissors to cut Cherry Baroness's hair to remove bubblegum, resulting in a new hairstyle.

She appears in Peppermint Party to celebrate New Year's Day! She has her original hairstyle from Cherry Chateau.

In the 98th episode, Divine Diner, she has very different hair and clothing style from original style on Cherry Chateau.

In the 106th episode, Scrumptious Studio, she wears a blue dress.

In the 129th episode, Praline Pavilion, it was a rainy day, but she wants to go for a stroll around the Truffle Terrace. Therefore, Tiffi helps her by building a praline pavilion.

In the 184th episode, Pearly Parlor, Tiffi makes a portrait of Cherry Baroness to hide the broken mirror.

In the 33rd Dreamworld episode, Extraordinary Estate, she has become Tiffi's maid, and serves her a large cherry.

Pearly Parlor
Add a photo to this gallery

Extraodinary Estate (animation)
Add a photo to this gallery 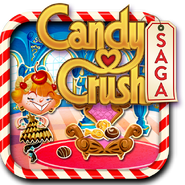 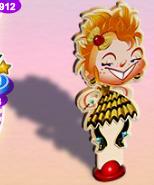 Character on map (after episode, Praline Pavilion)
Add a photo to this gallery
Retrieved from "https://candycrush.fandom.com/wiki/Cherry_Baroness?oldid=1612226"
Community content is available under CC-BY-SA unless otherwise noted.