Chilly Creamery is the 248th episode in Candy Crush Saga and the third episode of World 50 (HTML5). This episode was released on 15 August 2018. The champion title for this episode is Strawberry Shaker.

Tiffi and Minty are sampling various creamy foods and drinks. 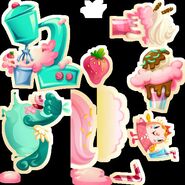