Choco Rio Grande is the 47th episode in Candy Crush Saga and the second episode of World 10 (HTML5). This episode was released on 17 September 2014. The champion title for this episode is Munchy Mole.

Before episode:
Mario the mole feels hot due to the warmth of the sun. Also, his pool is leaking liquorice due to the heat.
After episode:
Tiffi has a cookie sombrero and offers it to Mario to wear.

Choco Rio Grande is an easy episode, with a mean of 2.6. It has two somewhat hard levels: 682 and 688. Overall, it is slightly harder than the previous episode, Crunchy Courtyard. 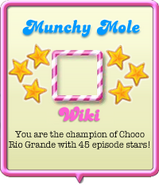 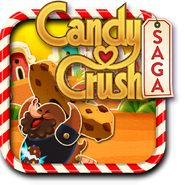 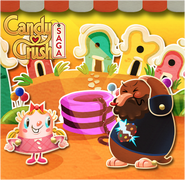