Chocolate Barn is the 17th episode in Candy Crush Saga and the second episode of World 4 (HTML5). This episode was released on 8 November 2012. The champion title for this episode is Farm Hero.

This episode contains one somewhat hard level: 235, and three hard - very hard levels: 232, 241 and 243. Overall, this is a somewhat easy episode, with a mean of 3.13, and it is MUCH harder than the previous episode, Crunchy Castle. 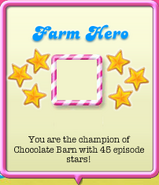 Another view of Chocolate Barn in the CCS television ad 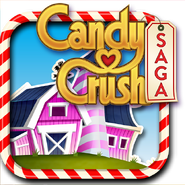 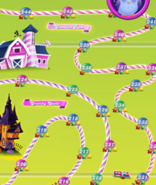